This Vertigo is Making My Head Spin!

Having dizzy spells or vertigo can be anything from a terrible nuisance to severely debilitating, but It’s rarely any fun. Many times medications are prescribed which may dull the experience, but depending on the cause, they may do little to help or even make the condition worse.

I see a lot of patients complaining of the dreaded dizzy spells. Sometimes it’s definitely a cervical spine issue. The top 3 vertebrae of the spine play a significant role in our balance mechanisms. There are of course, many causes of dizziness from blood sugar imbalance to prescription drug interactions or worse, a brain lesion. However, the majority of the acute cases I see typically involve a little trouble with the inner ear.

After ruling out more serious conditions, or referring out patients that may require other care, I find the common symptoms to be fairly consistent. Namely, Movement! Let me describe the relationship between our inner ear and how it perceives our movement and body positions.

If you’ve ever seen a picture of the ear, specifically the cut-away of the inner ear like the one below, you may recognize the little snail shell looking organ which is called the cochlea. Connected to that are 3 little curved tubules called the semicircular canals. That entire structure is called the labyrinth (purple in this illustration). The 3 canals are positioned in the X, Y and Z plane orientation to each other. 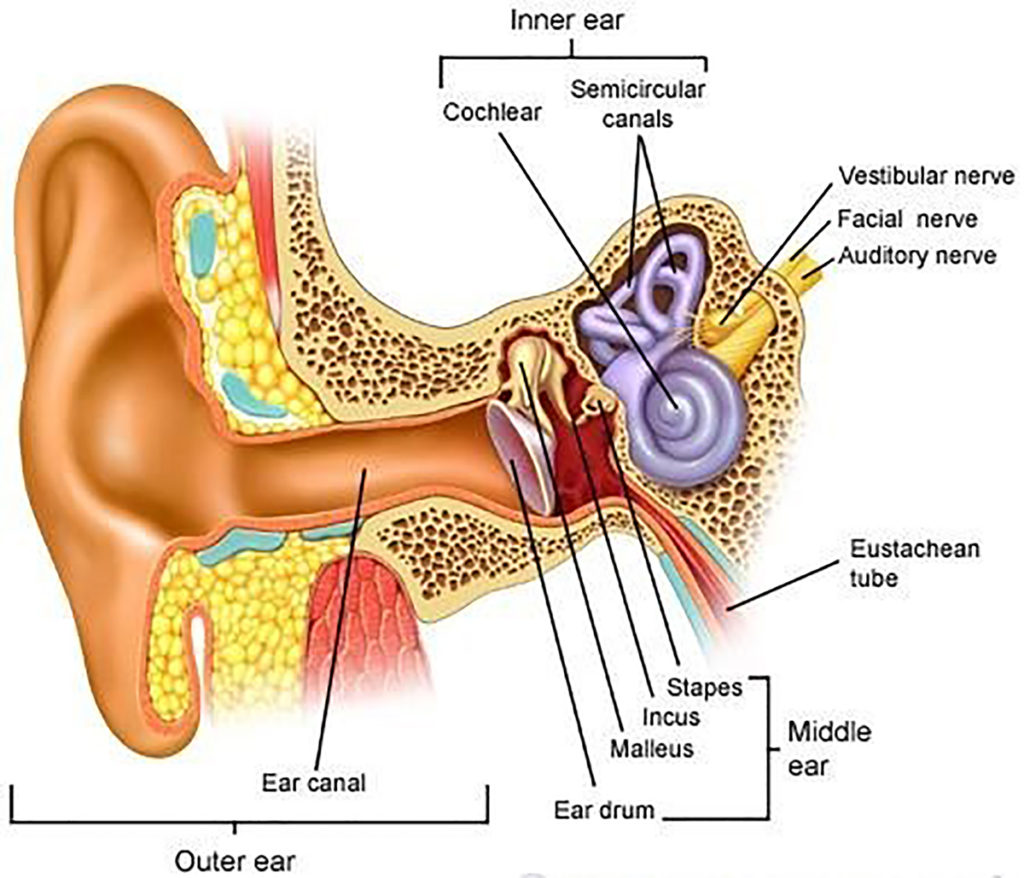 The semicircular canals serve an important function in providing sensory information for our movement and balance. The canals are lined with micro hair fibers called cilia and are filled with a viscous fluid. When we move, the fluid shifts around through the canals, stimulating the tiny hair fibers which then transmit small impulses to the brain. The brain then decodes the pulses which is then interpreted as movement and positioning of the body.

The base where the 3 canals join is called the utricle, and in there is a small calcium carbonate organelle called an otolith. As we age, through the natural degeneration of aging, small fragments of the otolithic membrane break away and become free floating in the fluid within the canals. Although common in the elderly, this condition has also been known to result from head injuries and other trauma.

When these particles, that are not supposed to be there, move around in the canals, they rub against the cilia. When this happens, they transmit impulses to the brain, which is falsely interpreted as movement that is not occurring. Or it is movement that is misinterpreted as more extreme than it actually is. This is why, if this being the cause, the episodes of vertigo are more drastic with certain movements, especially quick turning movements.

This may sound like a big problem, and it certainly can be severely debilitating. However, the remedy for it is most often quite simple.

In 1980, Dr. John Epley developed a maneuver that is now practiced by medical doctors, chiropractors, osteopaths and physiotherapists, and has a reported success rate of between 90 – 95%. It involves taking the patient through a series of specific positions. This allows the floating fragments to settle back down into the base of the canals where they can be re-absorbed by the utricle.

The protocol recommends a series of these maneuvers over the course of several days until the symptoms resolve. However, in my personal experience, I have rarely done the procedure more than 2 – 3 times before the patient reports having no more problems. Although, in the last 17 years, I can count on one hand the times that it took longer or wasn’t entirely successful. In those cases it is usually due to other compounding problems.

If you or someone you know are troubled by those unfriendly dizzy spells, come in and talk to me. This is about as simple of a procedure that can be done, to rule out this common cause, especially before resorting to more costly or drug based approaches.

Understanding what we should or shouldn't be eating and what supplementation can help us, and how to apply it properly is overwhelming.

Overcoming problems with weight, energy, digestion, and just about every other disease is successfully accomplished in only one way, through nutrition.

Even people who "eat well" often have imbalances or are missing nutrient components that could easily put an end to health problems when applied correctly.

Have a Nutritional Evaluation performed today with Dr. Wilson and find out how your health can improve! And don't worry, it's easy and painless! Click Here

Don't miss out on our monthly supplement specials! Support your body's needs and save money at the same time! Click Here