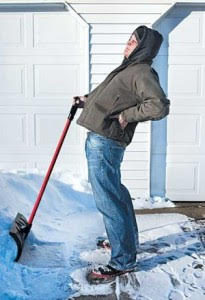 Shoveling – Great Advice to Avoid Injuring Your Back!

It’s that time of year when we’re probably going to have to shovel some snow, whether we want to or not. Personally, I’ve always tried to go with the philosophy of, “just wait, it will melt!”. However, that approach has never really served me very well, just ask my wife!

When it does come time to brave the elements, you have probably heard of several health risks associated with shoveling snow. These are all very important to be aware of. Because of the colder temperatures, it’s easy to over exert yourself without knowing it. Working at a moderate pace and taking short breaks is a good and safe strategy. It’s also wise to dress appropriately. Even though you may be working up a sweat, it’s still not T-shirt weather!

Those tips and other advice about working out in the cold are wise words for everyone. However, I want to share some different advice about the risk of injury associated with shoveling. As mentioned before, it’s a popular ‘job’ we often must do during the winter, but this applies to any sort of shoveling tasks. Like that back-yard landscaping project you have coming up this spring!

It doesn’t matter if one has a strong back, is in decent shape, or even does a lot of bending and lifting for a living. There is something specific to the nature of the movements involved in shoveling that can cause injury to the lower back.

The outer layers of the disc are called the Annular Fibers. They are layered like the belts of a car tire. But in the disc, each layer is composed of fibers that all lay in the same direction. However, as you can see from the diagram, each layer has its fibers oriented in the opposite direction from the layer below.

This unique design gives the disc its tensile strength. When you bend over or extend back, the disc provides flexibility and cushioning for the spinal joints. Even when you turn your back, the disc allows for smooth rotation.

However, there is a combination of movements that can compromise the disc structure and cause it to become damaged. That movement is when you bend and turn at the same time while under weight or force. In other words, bending over, lifting a load and twisting while straightening back up all at the same time.

Shoveling may not seem like anything different than other physical bending and lifting efforts. However, because of the twisting part of the movement, in combination with the pressure from added weight, it adds a tearing force to the disc that can cause it to weaken and become injured.

Of course, shoveling isn’t the only action that can create this effect. Any combination of bending and lifting something heavy while turning can cause problems. Something like loading boxes for instance, where you would bend over to lift the box, and twist in the process of stacking it up elsewhere.

What does all this mean? Well, unfortunately, you still don’t get out of shoveling snow! Whether shoveling or other similar tasks, just being careful with the combination of movements will decrease the risk of injury and keep your back strong.

Bending and lifting is OK, but first be sure to bend and lift with your legs. Then when you stand back up, come up straight, then take steps to turn your whole body in the direction you want, then dump the shovel of snow, or set down the box. The idea is to limit the amount of twisting you do while flexing the spine while also under a load.

Just be careful, watch your movements and you’ll be able to shovel snow for many winters to come!